Computer Science - Feb 22
O    A new laboratory has been created by the CNRS in Australia, in cooperation with three major Australian universities, IMT Atlantique and Naval Group, the European leader in naval defence. O    Its main objective: to develop new ways for humans to work with robots and autonomous systems.
Astronomy - Feb 18

Thursday 18 February, the Perseverance rover, carrying a suite of seven instruments including the French SuperCam, a greatly enhanced version of the ChemCam instrument already operating on NASA's Curiosity Mars rover since August 2012, set down in Jezero Crater, an impact basin 45 kilometres across, home to an ancient river delta that flowed 3Âoe billion years ago into a lake.

In shallow water, less than 30 metres, the survival of hard corals depends on photosynthetic unicellular algae (zooxanthellae) living in their tissues.

Almost 90 years after its discovery, a large shell from the ornate Marsoulas Cave in the Pyrenees has been studied by a multidisciplinary team from the CNRS, the Muséum de Toulouse, the Université Toulouse - Jean Jaurès and the Musée du quai Branly - Jacques-Chirac 1 : it is believed to be the oldest wind instrument of its type.

The quantum advantage: a novel demonstration

Is a quantum machine really more efficient than a conventional machine for performing calculations? Demonstrating this 'advantage' experimentally is particularly complex and a major research challenge around the world 1.

"Islamo-leftism" is not a scientific reality

"Islamo-leftism", a political catchphrase used in public discourse, has no basis in any scientific reality. Without being clearly defined, the term has been the subject of a number of often impassioned position statements, editorials and petitions.

What if more inclusive urban planning for poor populations was key to fighting dengue fever? This is what researchers from the CNRS, the Institut Pasteur and the Indian Council of Medical Research 1 have demonstrated using a geographical approach applied to the greater city of Delhi (India).

Recognizing liars from the sound of their voice?

Faster speech rate, greater intensity in the middle of the word, and falling pitch at the end of the word: that is the prosody 1 to adopt if one wants to come across as reliable and honest to one's listeners.

The SKA Observatory will design and build the most sensitive radio astronomy instrument ever created, operating over an unmatched radio-wave range. It is expected to study the formation of the very first stars and galaxies shortly after the Big Bang. 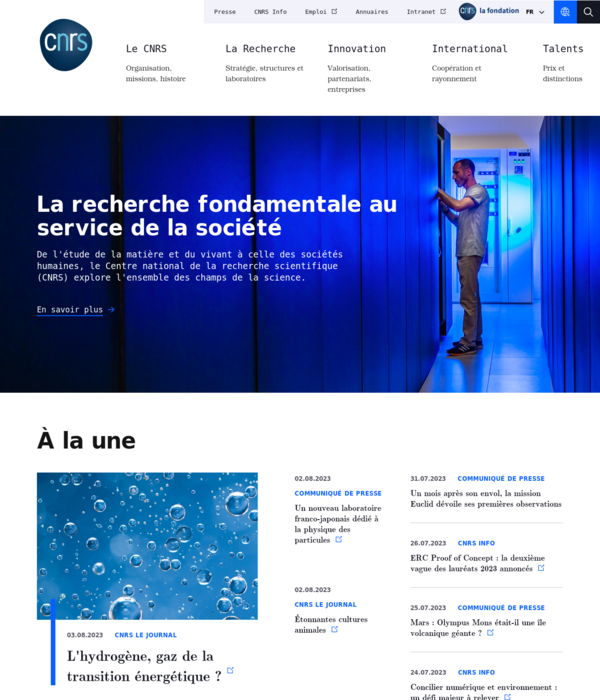 Job Offers in this Category