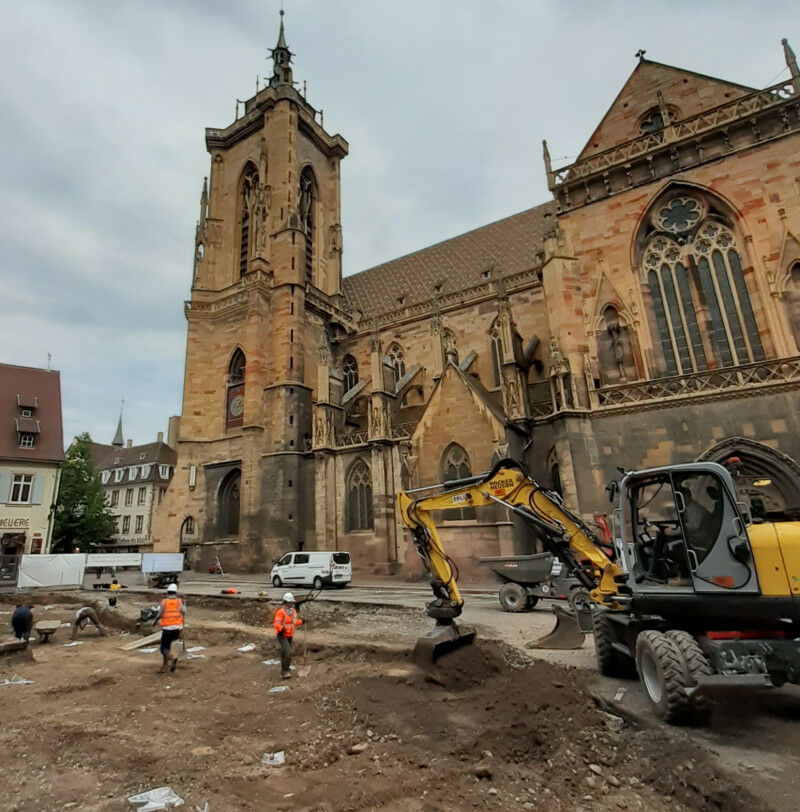 In Colmar, the Inrap is excavating the cathedral square and uncovering the old cemetery of the Saint-Martin collegiate church. The initial research provided first-rate information on the population of Colmar in the medieval period. 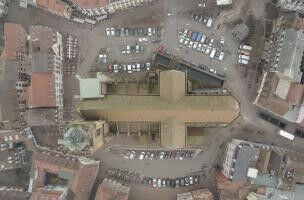 Aerial view of the excavation area, before the start of the first phase. City of Colmar

In the heart of the city, the redevelopment project of the Cathedral Square, carried by the City of Colmar, has motivated the prescription of a preventive archaeological excavation by the State (Drac Grand-Est). Indeed, the historical data and the results of an archaeological diagnosis carried out in 2015 showan ancient occupation of this space, notably marked by the presence of the cemetery linked to the collegiate church, attested between the 13th and the end of the 18th century. 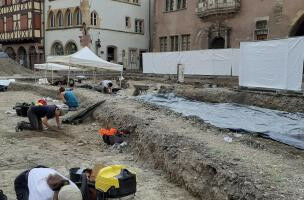 Pultures in the course of excavation. Inrap

This excavation, which began at the beginning of May, is carried out by the archaeologists of the Inrap. This research aims to safeguard the archaeological heritage through study. They are conducted in two phases. The first, from May to the end of August, in the part of the square located south of the canal. A second phase, in connection with the installation of networks and the planting of trees, will begin in September on the northern part of the canal.

History of the cemetery surrounding the collegiate church of Saint-Martin

The present collegiate church of Saint-Martin has succeeded several buildings, the first of which dates from the 11th century. A burial area developed around the church, the first written sources of which date back to the 13th century. The strong demographic evolution of the city requires its extension because of the difficulties of cohabitation with the inhabitants of the district. In the 16th century, this situation led to the use of the Sainte-Anne cemetery, located outside the city walls and reserved since 1317 for foreigners and the poor population. At the beginning of the 18th century, the Saint-Martin cemetery was progressively reduced, disused and finally evacuated. The "open" space around the collegiate church of Saint-Martin was then transformed into a square. The archaeological excavation will shed light on the origins and evolution of the medieval Saint-Martin cemetery. 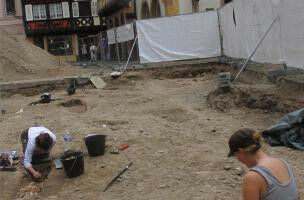 Pultures in the course of excavation. Inrap

Excavation underway on the south side of the Collegiate Church, first observations

The excavation is currently taking place on the south side of the collegiate church, where the square is lined with medieval buildings, such as the current ’ Corps de Garde ’, which corresponds to the former chapel of the cemetery dedicated to St. James, which was used as an ossuary until the 16th century. 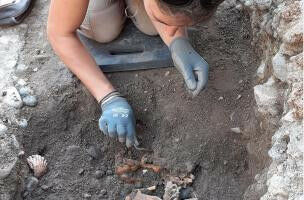 The scallop culture is being excavated. Inrap

Under this embankment, researchers have already uncovered about sixty burials, which are precious witnesses to the understanding of the lifestyle of the Colmar population in the medieval period. Indeed, their study allows us to obtain first-rate information concerning the buried population: age at death, sex, health, pathological and parasitological conditions, family ties and even diet. The precise study of the position of the bones also makes it possible to describe the funeral practices used in Colmar in the Middle Ages.

An excavated burial site is characterized by the presence of a scallop shell
perforated shell found near the skeleton: this shell is the symbol of a
The first observations have allowed us to determine that the pilgrimage to Santiago de Compostela was made with the help of a stone, which the pilgrim collected on the beaches of the Atlantic Ocean and then wore on his clothes. Initial observations determined that the individual was a woman. This singular burial
testifies of the capacity of archaeology to restore the daily life of the populations
The discovery of medieval sites, through discoveries that are sure to be exciting
in the months to come. 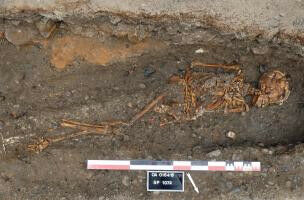 The culture known as the scallop shell Inrap

Exceptional opening to the public of the excavation on Saturday 18 and Sunday 19 June for the European Archaeology Days. More info 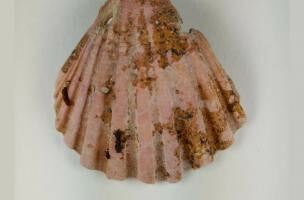 In northern Arabia, the monumental sculptures of the Camel Site date back to prehistoric times - 15.09.2021

Jebel Sahaba: A succession of violence rather than a prehistoric war - 27.05.2021
This site uses cookies and analysis tools to improve the usability of the site. More information. |