How does Harlequin Ladybug draw black dots or red dots? 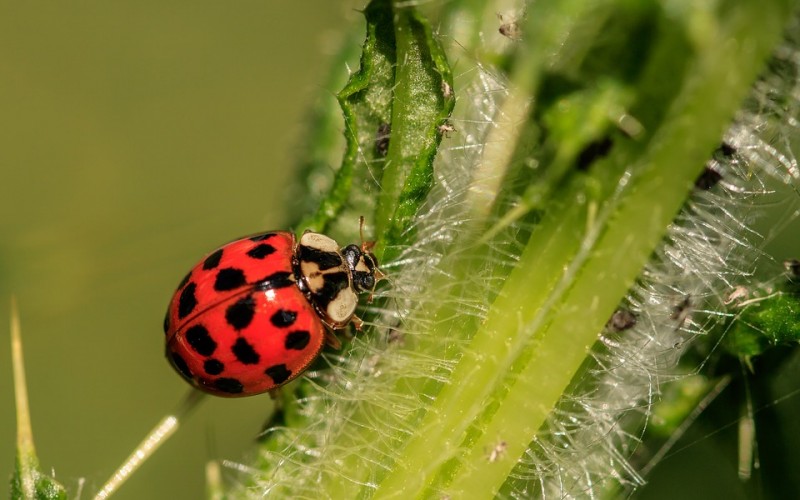 What distinguishes black ladybirds with red dots from red ladybugs with black dots? Children - as adults - have one day asked this question. Researchers have identified the genetic variations responsible for the different coloration patterns of Harlequin ladybugs. They have just identified the gene that alone has all the necessary instructions to draw the different patterns that decorate the wings. These results have been published in August 2018 in the journal "Current Biology".

Some ladybugs have elytra (hardened fore wings that cover the hindwings) black with two large red dots. Others also have two small red dots backwards, while others are decorated with a dozen dots. Conversely, other ladybugs have red elytra, adorned with twenty black dots. All these Harlequin (or Asiatic) ladybugs, although very different in appearance, and easily distinguishable from each other, belong to the same species: Harmonia axyridis. The existence of distinct forms within the same species is a very common phenomenon in insects, and is often manifested by various coloring patterns. Ladybugs, especially Harlequin ladybugs, are champions of the discipline, with more than 200 forms of coloration described in natural populations around the world.

These color variations have a genetic origin, that is to say within the species, genetic variations between individuals confer different coloring patterns. In the Harlequin ladybug it has been known since the 1950s that different forms of color result from variation of a single region of the genome, but without knowing exactly which one.

By comparing the genome of Harlequin ladybirds of different colors in several natural populations distributed around the world, researchers at INRA and CNRS have identified the region of the associated genome, and more specifically the gene responsible for the variety. color patterns in the Harlequin Ladybug.

This gene, named pannier, is activated during the development of ladybugs, especially in elytra, at the time of their formation. This gene is activated more precisely in different cell populations of the elytra, and these cell territories prefigure exactly where the black pigmentation will appear in the adult. Thus the different color patterns of the Harlequin ladybug find their genetic origin in variations of the spatial activation of a single gene that orchestrates the establishment of different elytra color patterns.

These results illustrate how variations in activation of a single gene can generate an infinite diversity of colored patterns, and as many discrete forms in natural populations. They will help to better understand the frequency variations of the different colored forms found in regions of the world where the Harlequin Ladybug is present.

How flies flip around on take-off from an upside- down position - 15.07