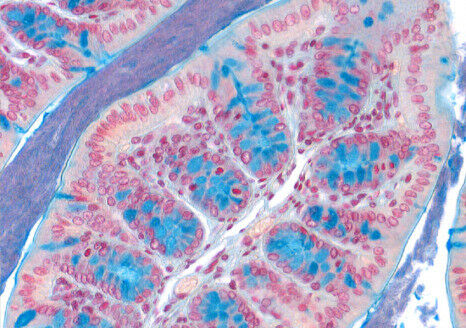 Section showing the interaction of the microbiota and the intestinal epithelium in the colon. In blue, the mucus secreted by the intestinal epithelium to protect itself against the microbiota. In pink, the nuclei of the cells of the epithelium © Noëmie Daniel/Inserm
Emulsifiers are food additives used to improve the texture and extend the shelf life of foods. They are found in many processed foods (ice creams, packaged cakes, sauces...), although their harmful effects on intestinal balance have been demonstrated. In a new study, scientists from Inserm, CNRS and Université Paris Cité at the Cochin Institute in Paris aimed to counteract the deleterious effects induced by the consumption of emulsifiers by fortifying the intestinal epithelium via its repopulation by a bacterium naturally present in the intestine: Akkermansia muciniphila. Adding this bacterium to the intestinal microbiota would prevent the damage caused by the consumption of emulsifying agents. These data, published in the journal , confirm the growing potential of Akkermansia muciniphila as a probiotic.

Millions of people consume emulsifying agents daily. These products are among the most widely used food additives in the food industry. They are used to improve the texture of foods and extend their shelf life. For example, emulsifiers such as lecithin and polysorbates ensure the smooth texture of industrial ice creams and prevent them from melting too quickly once served.

Previous studies conducted by the team of Benoît Chassaing, Inserm researcher at the Cochin Institute (Inserm/CNRS/Université Paris Cité), have shown that the consumption of certain emulsifying agents leads to the alteration of the intestinal microbiota [1] and its interaction with the digestive system. These alterations of the microbiota lead to chronic intestinal inflammation and metabolic deregulations. Specifically, this research showed that the consumption of dietary emulsifiers induced the ability of certain elements of the microbiota to come into close contact with the epithelium - the first line of defense of the digestive tract which is normally sterile.

In this new study, the researchers wanted to counteract the deleterious effects induced by the consumption of emulsifiers by strengthening the intestinal epithelium. To do this, they were more specifically interested in the bacterium Akkermansia muciniphila, which is naturally present in the intestine and has already been shown to have an impact on the interactions of the microbiota with the rest of the body.

Moreover, it is known that the quantity of this bacterium is decreased following the consumption of emulsifying agents.

"This work supports the notion that the use ofAkkermansia muciniphila as a probiotic may be an approach to maintain metabolic and intestinal health against modern stresses such as emulsifying agents that promote chronic intestinal inflammation, and the resulting adverse consequences . Moreover, it suggests that the intestinal colonization by Akkermansia muciniphila could predict the individual propensity to develop intestinal and metabolic disorders following the consumption of emulsifiers: the more the presence of the bacterium is important, the more the individual would be protected from the harmful effects of food additives on the microbiota", explains Benoît Chassaing, last author of the study.

[1] All the microorganisms - bacteria, viruses, parasites and non-pathogenic fungi, known as commensals - that live in the intestine. 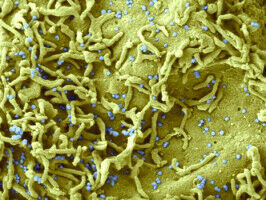 Dietary Exposure to Nitrites Associated with Increased Type 2 Diabetes Risk - 17.01
Related Stories
Agronomy / Food Science
How can we feed humanity? - 04.11.2022
The origin of domestic sheep finally elucidated - 06.05.2022
This site uses cookies and analysis tools to improve the usability of the site. More information. |